With the conflict knowledge and training experience of Result Mediation and the business process and change power of Wundershift Management, we help organizations become conflict competent.

When discussing conflict competence with our clients it quickly becomes clear how much sense it makes to manage conflict competence as an important initiative to increase results. When there are fewer conflicts at work, it is more fun to work. More fun work leads to more productive work, more innovation and lower (absenteeism) costs.

As an organization you can deal with conflict in a proactive, structural manner. Structural handling of conflict, truly embracing conflict management as a critical success factor, is a service that Result Mediation offers in collaboration with Wundershift Management under the name “Columba”.

We can be blind to the obvious, and we are also blind to our blindness.
Daniel Kahneman

Our dream is to make organizations conflict competent and to have “conflict” not seen as a taboo. Conflict is not destructive, but conflict avoidance often is.

Broadly speaking, there are 3 reasons why Columba is important:

How conflict competence is your organization?
Conflict is not destructive, but conflict avoidance often is.

Get in touch to see if we can also make your organization conflict-competent.

Schedule an appointment
Call me back
Robert Jan HylkemaView

If two people do not have different opinions, one of them is redundant according to the American gum magnate William Wrigley Jr.
Innovation and success often comes from apparently conflicting partnerships (Jobs & Wozniak at Apple, Miles Davis & John Coltrane). The successful Dutch national coach of women’s football, Sarina Wiegman considered conflict “the last part that the team missed”.

In short, conflict is useful when it leads to open discussion. This requires trust and knowledge of ourselves, each other and the organization. A conflict competent organization deals with conflict pro-actively.

Columba is your partner in building a conflict competent culture that inspires growth and innovation.

Good employership is increasingly seen as one of the most important factors for successful business. Good employership means less turnover and the ability to attract the best employees. There are many things that contribute to being a good employer.

Our contribution is to make employees feel safe and competent in conflict. Employees who feel safe not to avoid conflict feel connected and have a positive influence on the success of the organization.

Although much is known about the costs of conflict, a lot is also not known. A common distinction is between direct costs (absenteeism, dismissal costs, reintegration costs) and indirect costs (including the above-described lack of innovation, lack of productivity, turnover, etc.).

In the Netherlands, according to TNO (2018), almost 1 in 3 employees had a conflict at work (30.2%). Not all conflict leads to absenteeism, but the direct costs of conflict absenteeism are estimated at just over € 30,000 per year for a company of 250 employees. It is also striking that the greatest risk profile for conflicts at work is as follows: male, highly educated, manager in public administration or industry.

Regardless of all the figures, we know that most people feel that costs of absenteeism will go down if there were less destructive conflict. That is what Columba stands for.

Columba’s method recognizes 4 parts that can be used together or separately to arrive at a conflict competent organization. 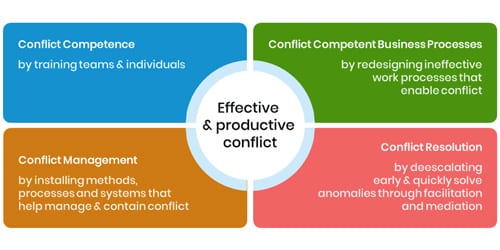 Together we develop a program based on an initial conflict competence analysis. This analysis can be done through a survey and/or interviews. 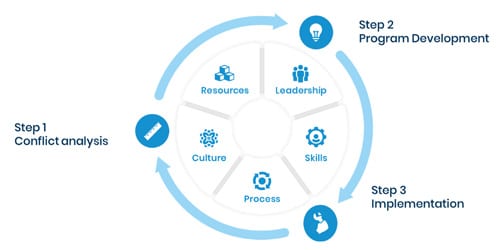 Based on our experiences with mediation and in training organizations and people, we are convinced that everyone can has potential to improve in dealing with conflict. Understanding conflict dynamics, the impact of your own conflict profile, understanding that cultural differences play a role are some aspects where structural improvements can be made. Therefore, an important block within Columba is to train individuals and groups in these areas. All our courses are specifically adapted to the situation in your organization or can be chosen from the general curriculum. Central to all our courses is practicing skills yourself.

Our conflict management solutions ensure that work is done structurally and integrated within the normal management of the organization. “To measure is to know” is a key concept here. Components are typically a zero measurement, KPI determination, conflict profiles per role and conflict escalation processes.

Our goal is not to have conflict escalate, but it will not completely prevent the need for help to resolve conflicts. As a reliable and neutral party, we provide both counseling and mediation.

Wondering how Columba can work for you?

Get in touch and start with your conflict competence